UNLEASH THE POWER WITHIN

GET THE LIFE YOU DESIRE & DESERVE

Overcome any fears holding you back and start living the life you desire at Unleash the Power Within.

This 4 day event with Tony Robbins will help you unlock and unleash the forces inside you to break through your limitations and take control of your life. Unlike other personal development plans, Unleash the Power Within is an immersive experience that will give you decades of proven strategies over one long weekend.

No matter what you want in life – joy, love, passion, fulfillment – Unleash the Power Within will give you the drive and momentum to achieve it. Don’t settle for an ordinary life when you can create an extraordinary one! Commit to the ultimate weekend of personal growth and set personal development goals you can (and will!) conquer at Unleash the Power Within.

No-one understands the psychology of success like Tony Robbins who has coached more than 50 million people from over 100 countries.

An authority on Peak Performance Tony has also advised some of the world’s highest-performing achievers: from 7-figure clients like Fortune 500 CEOs to heads of state to Olympic athletes.

Tony Robbins is the author of six internationally bestselling books, including the recent New York Times #1 best-seller MONEY: Master the Game and UNSHAKEABLE. Robbins has empowered more than 50 million people from 100 countries through his audio, video and life training programs. He created the #1 personal and professional development program of all time, and more than 4 million people have attended his live seminars.

He is the chairman of a holding company comprised of 40 privately held businesses with combined sales exceeding $5 billion a year.

His work has touched the lives of top entertainers, such as Aerosmith, Green Day, Usher and Pitbull. Billionaire business leaders seek his advice as well; casino magnate Steve Wynn and Salesforce.com founder Marc Benioff are among those who call on him for coaching.

As an active philanthropist, through his partnership with Feeding America, Mr. Robbins has provided over 325 million meals in the last 3 years to those in need. He is on track to provide a billion meals over the next 7 years. He has also initiated programs in more than 1,500 schools, 700 prisons, and 50,000 service organisations and shelters. He provides fresh water to 250,000 people a day in India to prevent waterborne diseases, the #1 killer of children in that country.

ONE WEEKEND CAN CHANGE EVERYTHING

TRANSFORM YOUR LIFE IN 4 DAYS 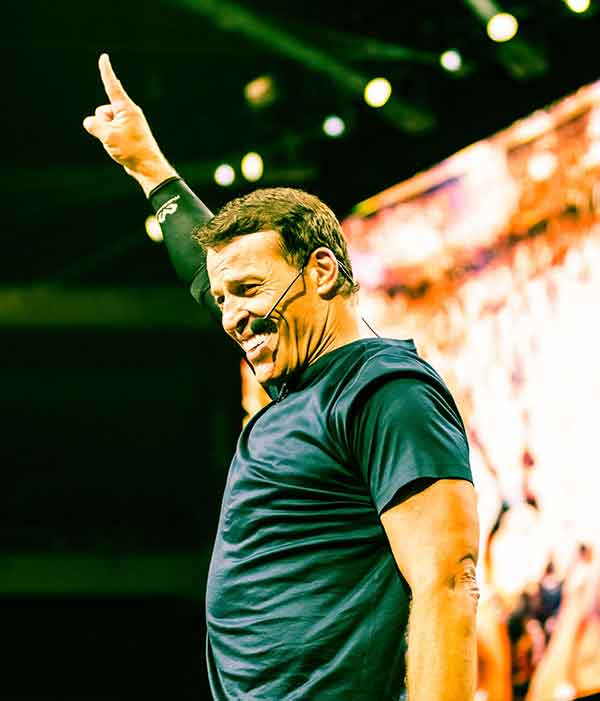 The power of success conditioning DAY 3:
BREAK THROUGH
TO YOUR NEW LIFE DAY 4:
THE POWER
OF PURE ENERGY

12 master principles of a vital life

"Your past does not equal your future."

Those who create an extraordinary life and achieve their highest vision share one fundamental power: the capacity to turn their fears and limitations into positive focussed action.

The power of success conditioning

Clarity is power. Leaders have it; followers are constantly looking for it. You'll acquire it in this session, no matter where you're starting from.

You'll leave with a clear understanding of what it is you truly want most in your life, make fundamental decisions, build a plan and create strategies for sustained momentum.

BREAKTHROUGH TO YOUR NEW LIFE

Now that you've conquered your fears, clarified what you want and made a plan for getting there, the only thing that's holding you back are the inevitable inner conflicts that prevent you from taking consistent action.

On this day, you'll uncover beliefs that limit your life.

THE POWER OF PURE ENERGY

12 master principles of a vital life

What's the most important factor to creating an extraordinary quality of life?

The answer is energy. Your health is the most important factor, yet in a time of constant demands, we often neglect what we know is most important.

If you're going to take your life to the next level, it's vital to make a commitment to living a more energised and healthy life.

Joseph McClendon III will be featured on Day 2 & 4

Unleash the Power Within, Tony Robbins Live in Sydney, 17-20 September 2021

OFFER FOR A LIMITED TIME ONLY

The way to make the ultimate experience even better is to share it.Who do you want to unleash your full potential with? Friends, family or colleagues?

All prices shown in AUD

Unleash the Power Within can Transform Your Life, like it has for thousands of participants. Tony GUARANTEES that, after having participated in the first day of Unleash the Power Within, you feel you haven't learned enough to create a more fulfilling and inspiring life, simply hand in your program materials and we will send you a 100% money back refund.

(a) To qualify for the money back guarantee, you must register and attend Unleash the Power Within 2021.

(b) The money back guarantee is available to attendees between 16.00 and 20.00 (Australian Standard Eastern Time) on the 17th September 2021 of Unleash the Power Within 2021. Requests made outside of these times stated will not be provided with a money back guarantee.

(d) The refund will be equivalent to the monies received from the purchaser for the seminar, minus any handling and booking fees. This will be returned to the purchaser within 30 working days from the conclusion of Unleash the Power Within 2021.

(e) If you have made your payment using our partner Pay Right, the refund to you will be the equivalent of the funds received by Success Resources Australia PTY LTD from Pay Right minus any fees Pay Right have charged Success Resources Australia PTY LTD. Once the fees have been deducted, the remaining balance will be made to the purchaser within 30 working days from the conclusion of Unleash the Power Within 2021

(g) If you qualify for and are to receive a money back guarantee, any complimentary tickets and bonuses not yet issued as a part of your Unleash the Power Within 2021 program become null and void.

(h) If you qualify for and are to receive a money back guarantee, the value of any complimentary or bonus tickets already used will be deducted from the total amount of money to be returned to you.

A live, simultaneous translation service throughout Unleash the Power Within is available to attendees in certain languages. Please note that an additional fee applies to this service. Email enquiries to [email protected]

*Paid in full. All tickets are only valid for Unleash the Power Within 2021 in Sydney. Offers available for a limited time. Not redeemable for cash. Not valid with any other offer/promotion.
Full terms and conditions.

^For full details on eligibility for the money back guarantee see our Terms & Conditions.

The Unleash the Power Within program contains adult language and themes and is recommended for mature attendees aged 16 years and over. Due to the adult language and themes we do not allow children aged 10 or under to attend. Attendance by children aged 11-16 is only with parent or guardian discretion on the provision that they have a valid ticket and are accompanied by an adult at all times. Enter an environment reserved for the select few with a shared purpose and commitment to the best of the best.

2 FOR 1 ON GOLD TICKETS – limited time only

2 FOR 1 ON GOLD TICKETS – limited time only